The science works always get a lot of attention. Most of the time the work is rotated about every six weeks, they like to take their sweet time investigating, and digging deeper with the materials. I am sharing five of what is the current favorite science related activities on our shelves right now, in no particular order.

1. Snap Circuits! When the primary students were given an opportunity to have a go at this they went bananas! They were successful too. 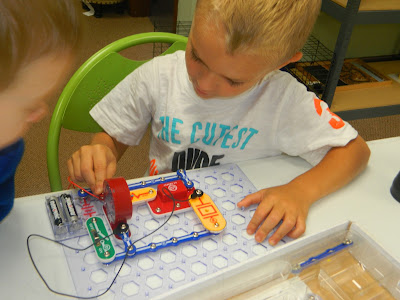 2. Our Observation and Weather station 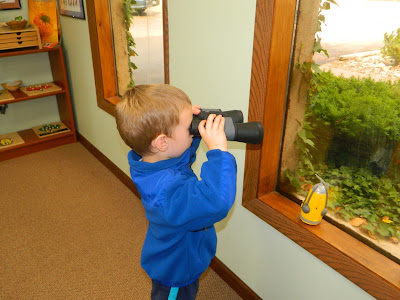 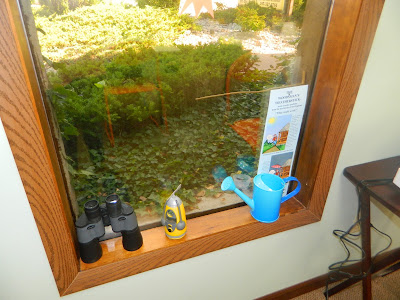 3. Our book with matching animal objects. 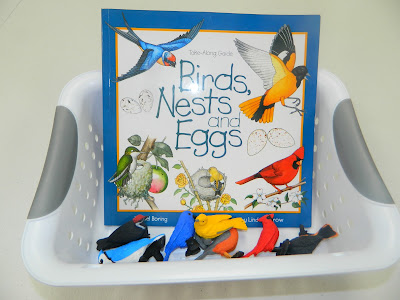 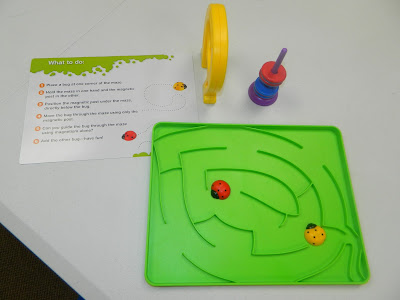 5. They always look for more information on their topic of interest with the Let's Read and Find series. I am fortunate to have all of the books in this series after purchasing them over the past ten years. 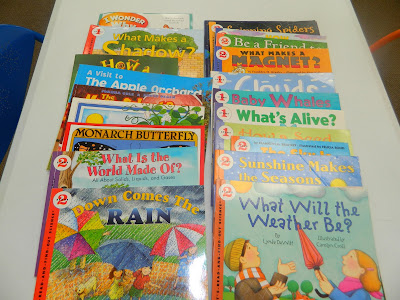 To see more Friday Five Science Favorites pop over to Montessori MOMents.
Posted by Unknown at 8:38 AM 3 comments: 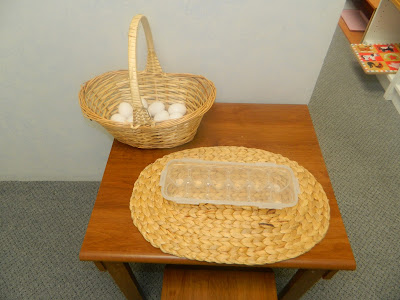 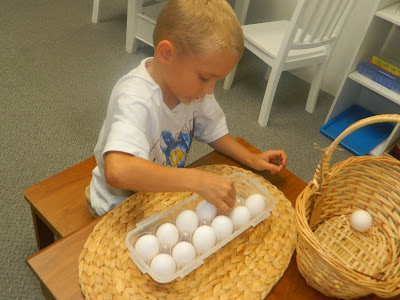 1. Packaging eggs. Oh how they love this! They have no idea that they are building their concentration skills up and gentle touches have been reinforced, they haven't cracked an egg yet! 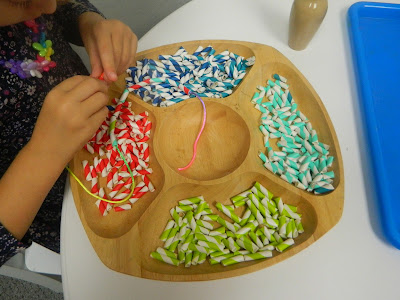 2. Making a necklace. An oldie but a goodie! This work is always available on the shelf year round. I just replace the type of beading and it is used. 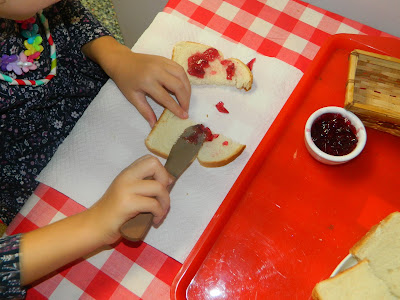 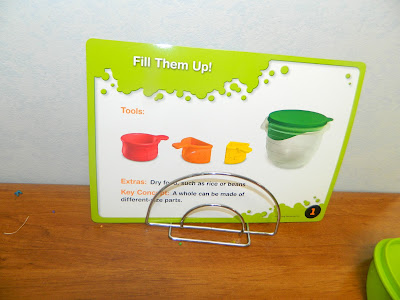 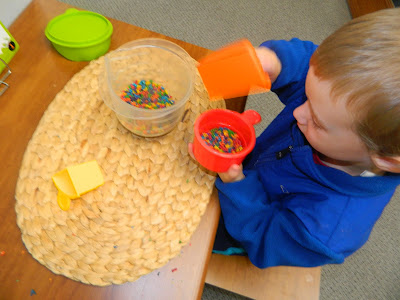 4. Mastering scooping with task cards. Which leads to another practical life lesson in sweeping for some:) and some exploratory sensorial skills too. 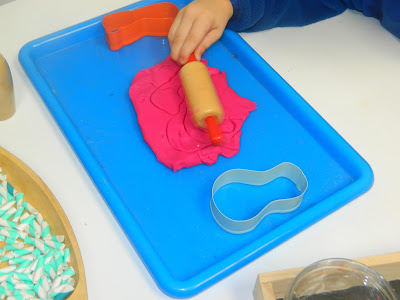 5. Learning to use a rolling pin with play doh and a cookie cutter. Again this activity is always a winner.

I hope you have enjoyed this Friday Five: Practical Life Edition you can pop over here to get some more ideas for your practical life shelves.

From Sandpaper Letter to Zoology


Today was the second day of Primary Class which only meets two days a week from 9-12 pm.  I was awe struck by a child that I had only met once before. He wasn't really interested in anything else but the Montessori materials, particularly the language materials. It was amazing how he navigated his way in the environment and took full advantage of every. single. second. of his time. We ended up doing three language lessons and a zoology lesson on his very first day.

Child: Can you tell me what this is (holding the sandpaper letter "t")?

Me: Sure!  Let's go dip our fingers into our special bowl that helps sensitize our fingers.

Me: These are our Sandpaper Letters and we use these to help us learn our letter sounds. This letter makes the sound "t" (as I demonstrate how to trace the sandpaper letter with my fingers). 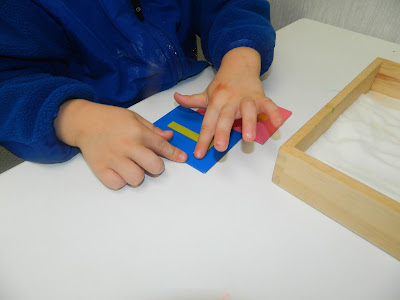 Me: Can you tell me the name of this? (I asked the child while pointing to the sandpaper letter)

We return the Sandpaper Letter.

Child: Can I play with this?(as he is picking up the entire set of phonetic sound drawers:) 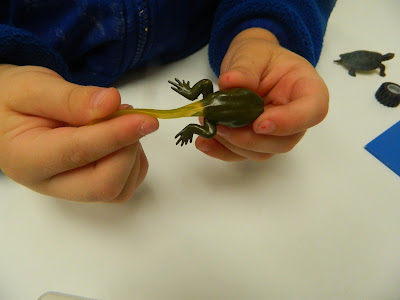 I then precede to show him that there are many different drawers and I can show him what is inside one the drawers.

Child: Here it is! ( he is totally excited that he recognized "t")

We named the objects first, and then he became mesmerized by the tadpole. Our initial sound lesson was put aside to discuss more about tadpoles. Which led us to the zoology area, discussing the life cycle of a frog. 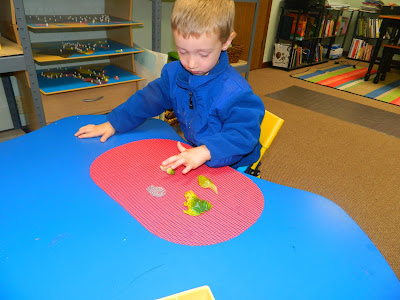 I was able to capture the photos because I am cool like that (just kidding). LOL. Really though, I have mastered the art of using the camera to document work in the classroom. But it still wouldn't of happened if he didn't repeat all of the works three times, and loves to have his picture taken which could easily be another post in which I share how we learned about my camera that I wear during our morning line time. Digital Photography is on everyone's to do list at the Studio! 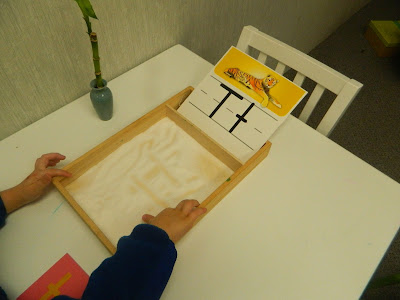 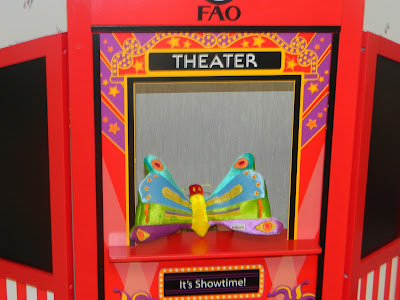 He also worked with the salt tray, and told everyone a story about a caterpillar while putting on a show. I also learned that his favorite color is red, and he explained to his friends that the red mat is the only mat he would like to use.

We Don't Need No Education

Promote Your Page Too

I work with children of all ages. We are always looking for new materials to enhance our montessori works. Would you like us to review a product for you ? Contact me at www.theworkplan1@gmail.com